NAVIGATING THE CLOUDS – THE MAKING OF A PHOTOMONTAGE

NAVIGATING THE CLOUDS – THE MAKING OF A PHOTOMONTAGE

Making a photomontage is to me like finding a solution to a problem (albeit one I have created). I am looking for the best way to combine a set of images to create a scene that makes some sort of sense. Sometimes my starting point to creating an image is an object I have photographed which I think will give it an interesting focal point or structure, but very often I will choose to combine images because I think they will create an interesting or successful colour palette. I never start with an idea of what the final piece will look like, and I love that. I discover the final image through a creative and quite intuitive process.

THIS BLOG FOCUSES ON HOW I CREATED SEASCAPE 49 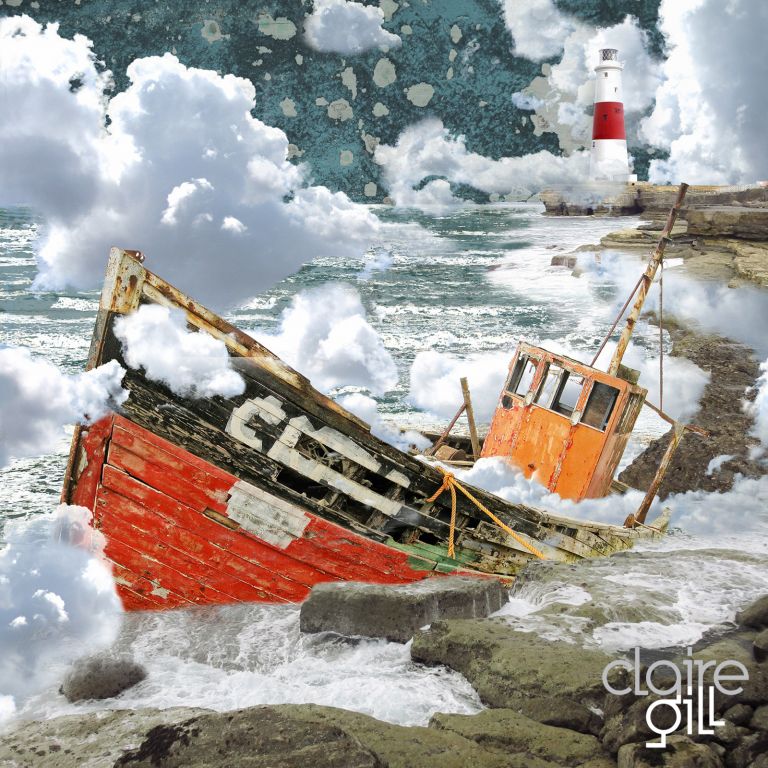 I had been working on this image on and off for about two years and the magic wasn’t happening. I knew I wanted to use a red boat and I started off with one I had taken in Hastings, going on to use one I had photographed in West Mersea. I liked the painted out name and the directional thrust of the boat, which made me think it needed to impose on the image. The bold colour seemed to stand out well against the blackness of the fishermen’s huts. I always work to combine colours, which either harmonise or set each other off and I liked the deep green of the sky against the red of the boat. I created several compositions, which worked in terms of the visual arrangement, but in all of these versions, the image never popped in a way that told me it was finished.

Generally when I am working the right side of my brain rarely touches base with the left hand side and words and verbalised ideas are things which never generally interfere in the process of making work. However Seascape 49 was a little bit different. Janet from the Lombard Street Gallery had offered to exhibit my new works, which as usual weren’t in any state of completion even two weeks before the exhibition opened. She asked me to send names, and sizes of the works proposed for the exhibition and I felt I should give more than my usual list of names, which continued with the sequential numbering of Seascapes. Maybe because at the time, there was no work to be named, I felt I should give the pieces a name to make up for their incompleteness.

I hastily titled the image ‘Navigating the Clouds’ as I had just added some cloud to this ongoing picture, which was by now frustrating me. Maybe I was trying to cover it up! I was still trying to resolve this image the night before taking them to be framed and although he image was passable, it wasn’t really making sense. I looked at the image in relation to the name I had prematurely given to it and realised that it had nothing to do with navigation.

It is the first time that I have titled an image before it is finished, and also the time I have used words to help me solve the image. 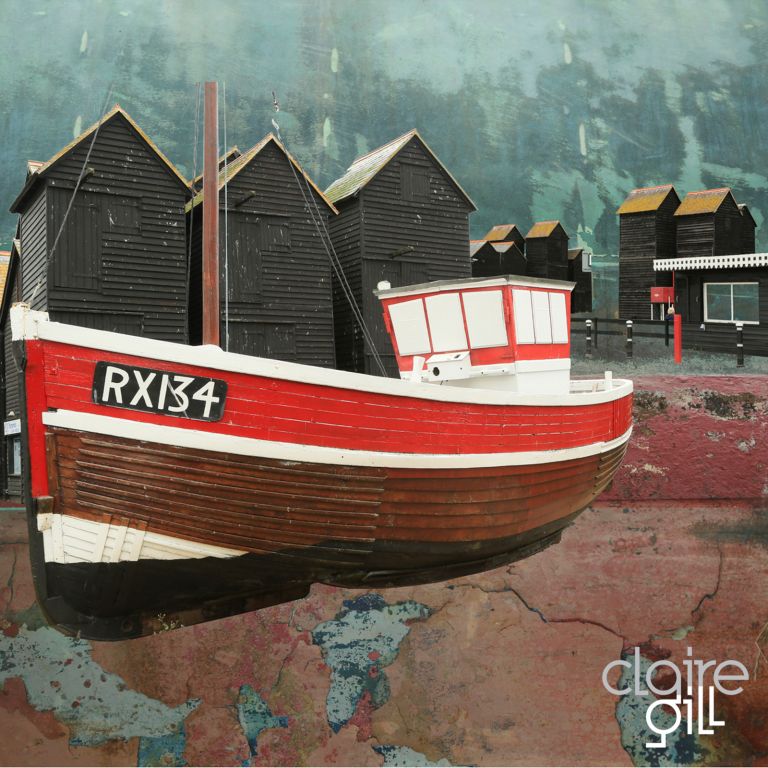 My starting point was to bring some images together to see how they sat with each other. These images were taken in Hastings. 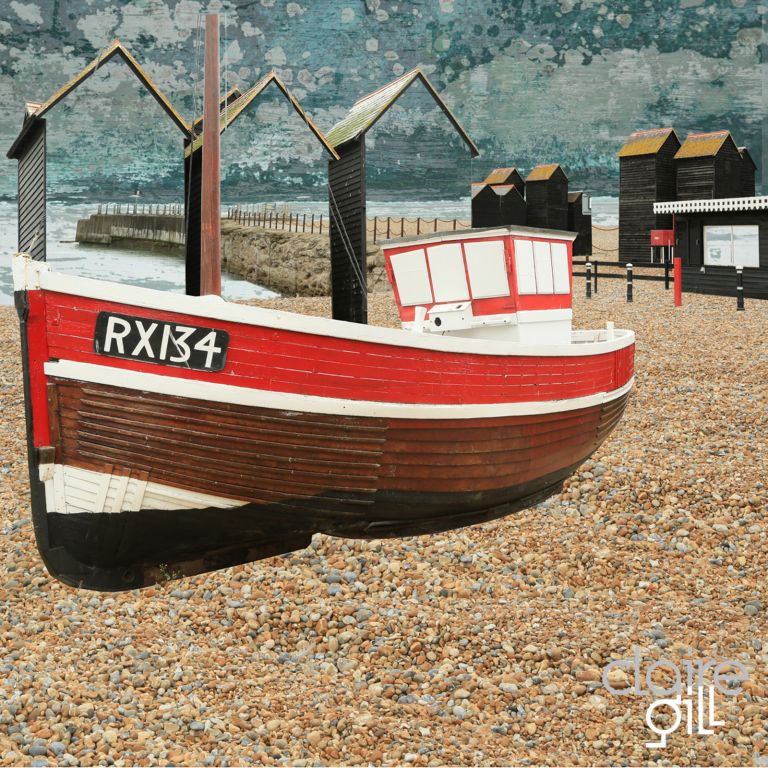 I liked the blackness of the huts but the image had no depth so I started cutting away the from of the huts in order to see through them, which also created an interesting structural element to the picture. 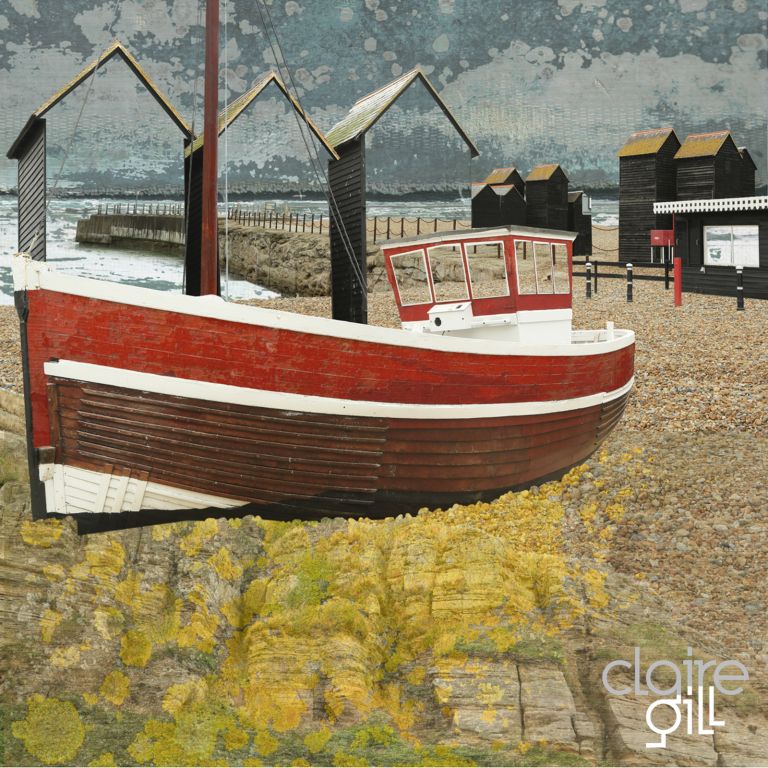 I introduced the harbour arm as this lead the eye from foreground to background. 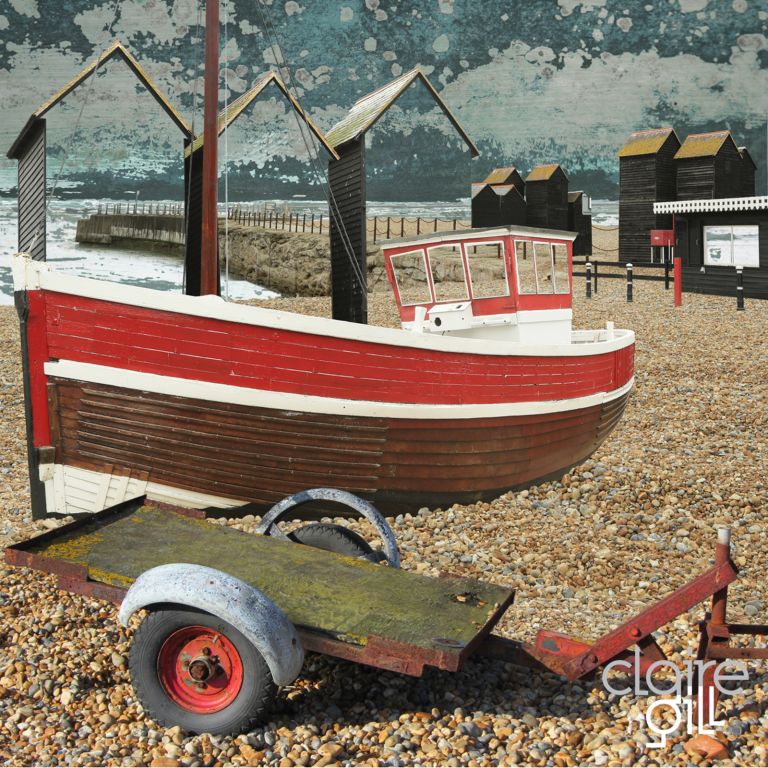 I began to play about with the foreground, introducing objects, I had found at Hastings, where most of the other images were taken. At this point the image looks alright. The composition works but there is nothing telling me that I have arrived at a final piece, no pop! 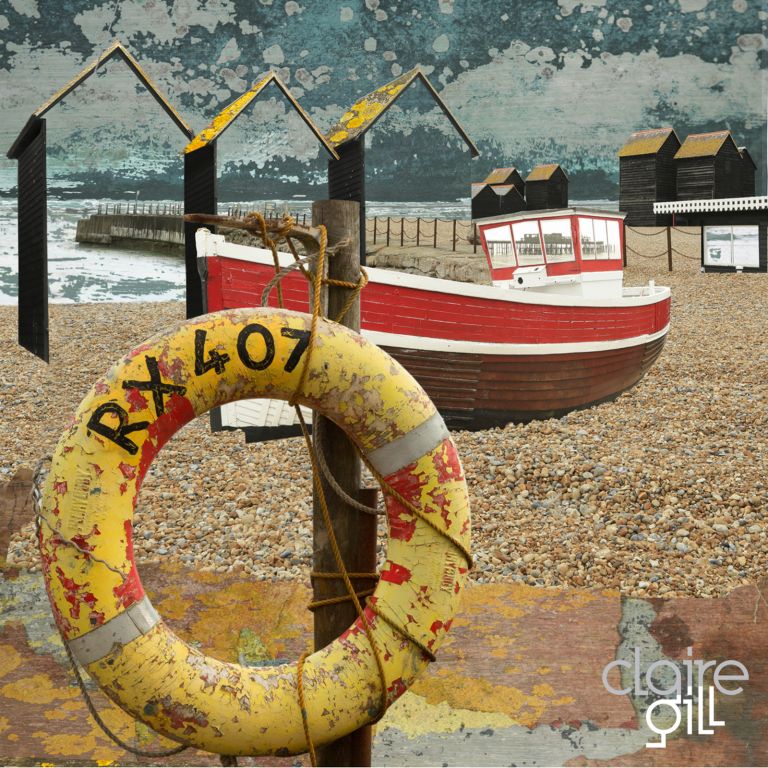 I introduced the life buoy because I thought the yellow and red tied in nicely with the rest of the image. 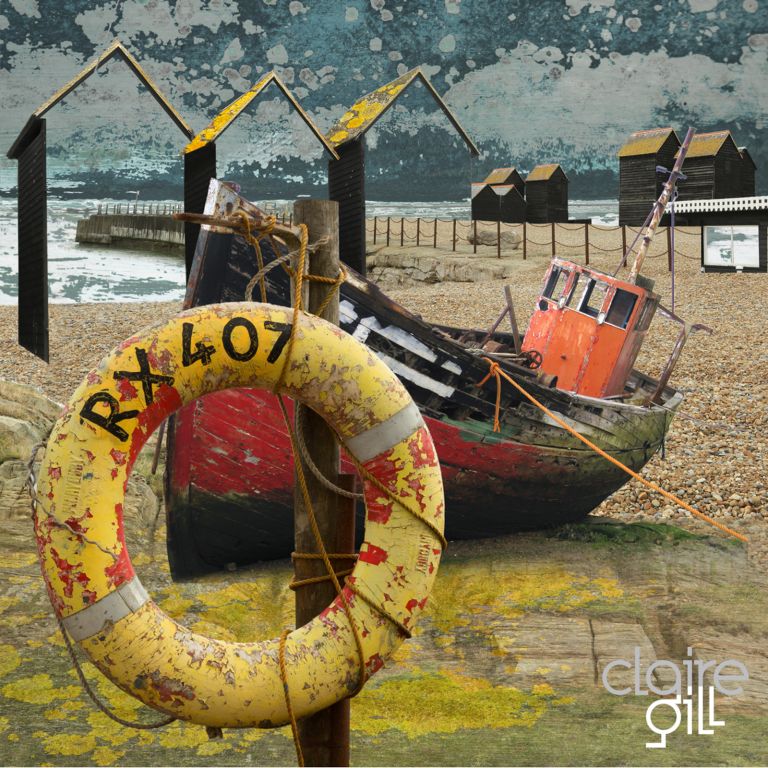 I introduced the boat from West Mersea. It had more character than the previous boat and a bit more depth of colour. 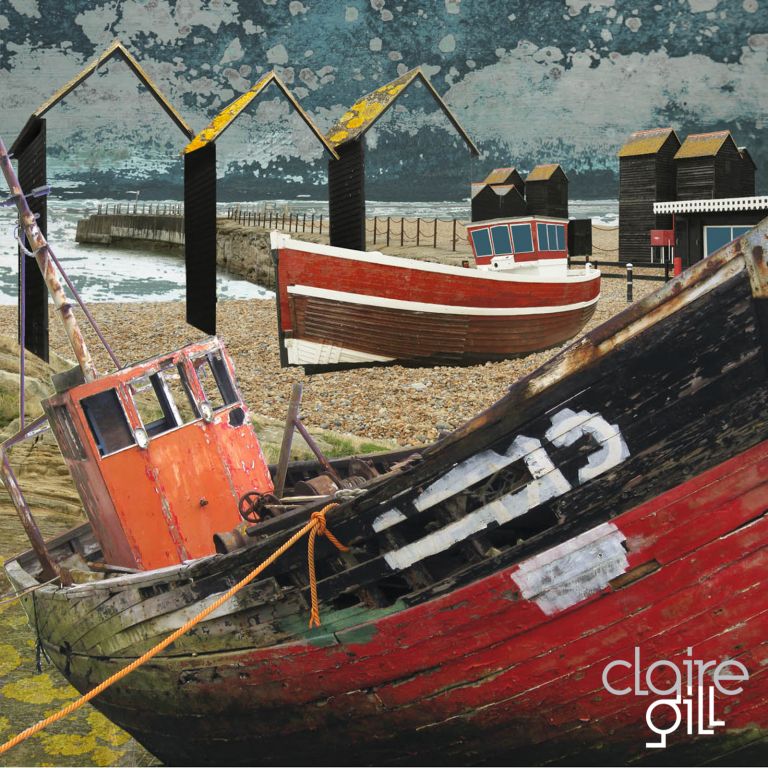 I really liked the directional thrust of the boat so experimented with it’s placement within the image. 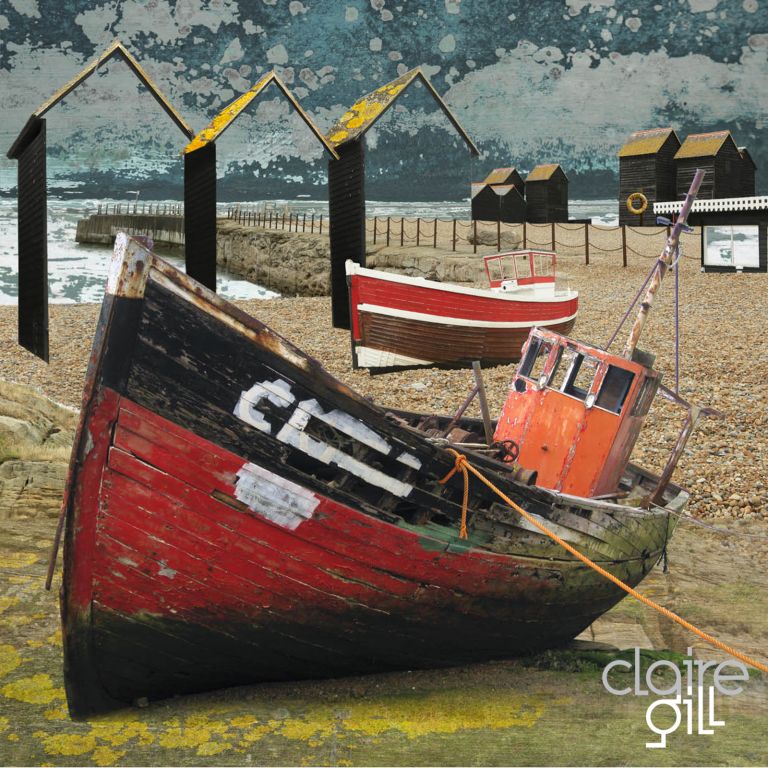 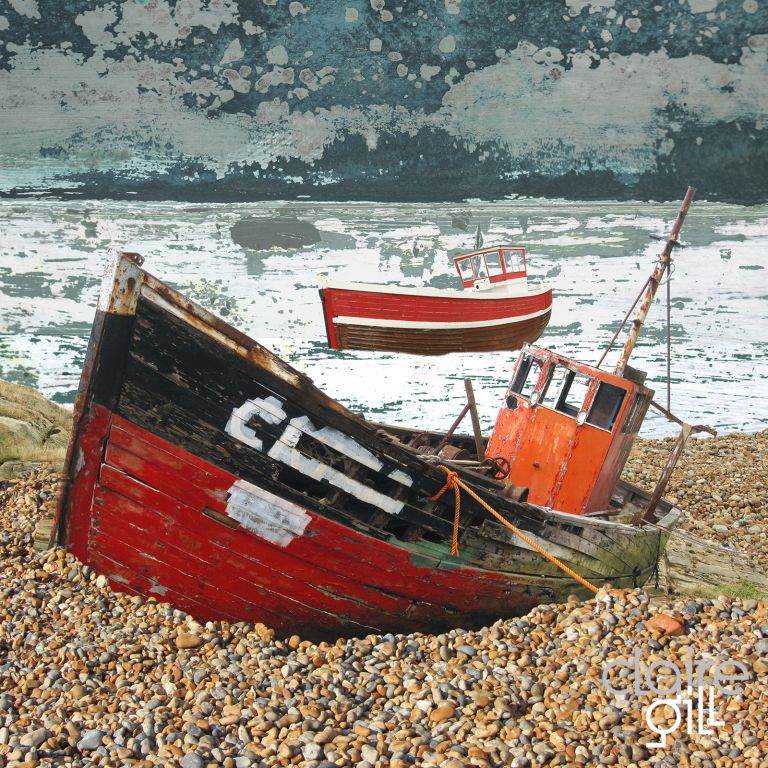 By this point I had kept coming back to the image on and off for months. I had been quite attached to the fishermen’s huts, but at the same time knew the image was not working so I experimented by taking them out and burying the boat in the foreground. 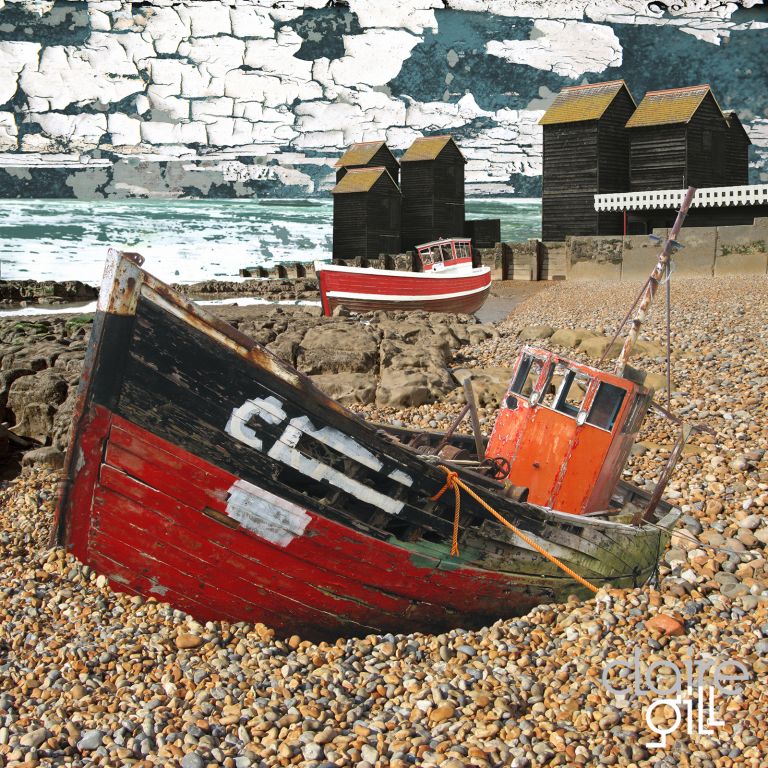 Here they are again (those huts). I can’t quite let them go. I play about with the landscape that leads to the sea, using an image taken on Hasting beach. 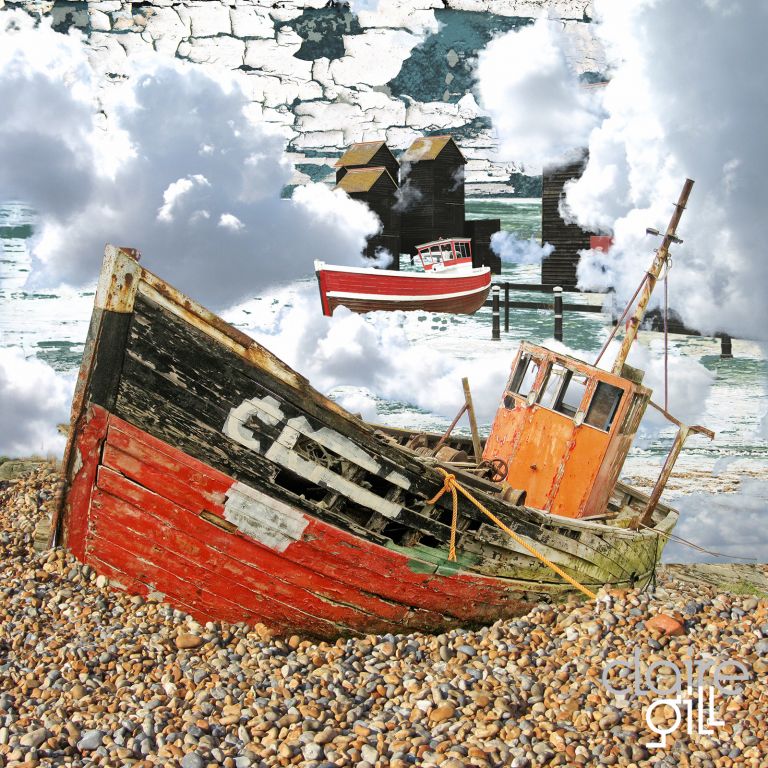 I bring in the clouds. I am looking for some magic. There is something I like about the way the clouds unite the foreground to the background. It is at this point that I tell Janet at the Lombard Street Gallery that Seascape 49 will be called ‘Navigating the Clouds.’ 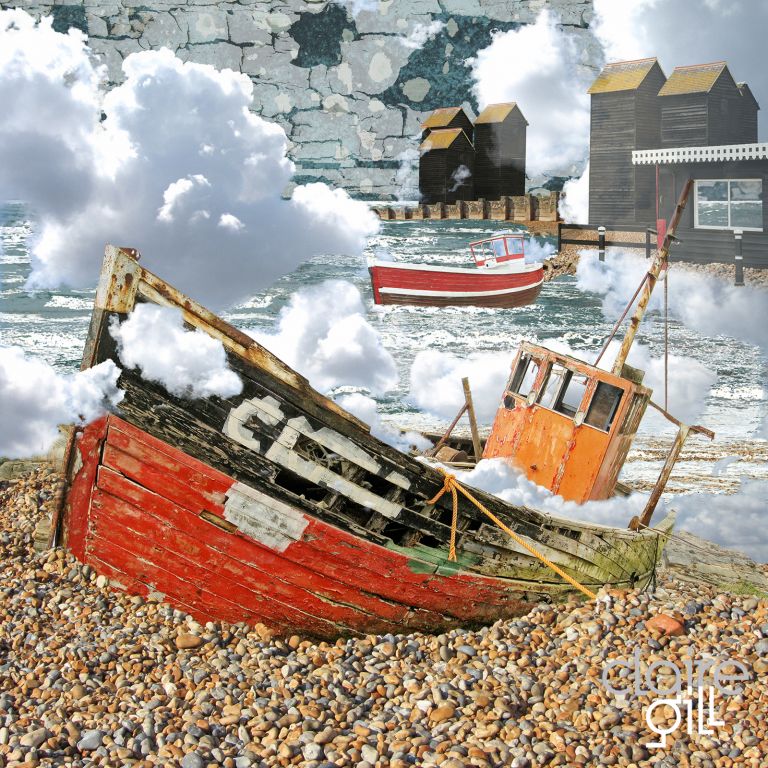 I try and create more atmosphere by making t he clouds translucent in places.

I start to think how the title I have given to Seascape 49 ‘Navigating the Clouds’ really makes no sense in term of the image as there is no sense of navigation involved. I start thinking about navigation and how ships can so easily be lost of they fail to navigate correctly. I thought about clouds and how they can white out everything. Then I think of a trip we took to Portland Bill where the waves were crashing against these massive rocks. It was cloudy and raining and inhospitable. I transferred an image I was using of Portland Bill from another photomontage that wasn’t working into this one and as soon as I placed it in the image, the whole image popped. The boat looked as though it was wedged in the rocks, caught out by the clouds and the image started to sing. The neutral colour of the rocks, which looked perfectly dull in the other image, provided the perfect ground for this image. I added the lighthouse to add to the story. I love being surprised by images and this was one of those that taunted me for months, only to be resolved by the pressure of of having to frame it the next dyad a tile I had given it weeks before.

Seascape 49 is available in all sizes as a limited edition print. 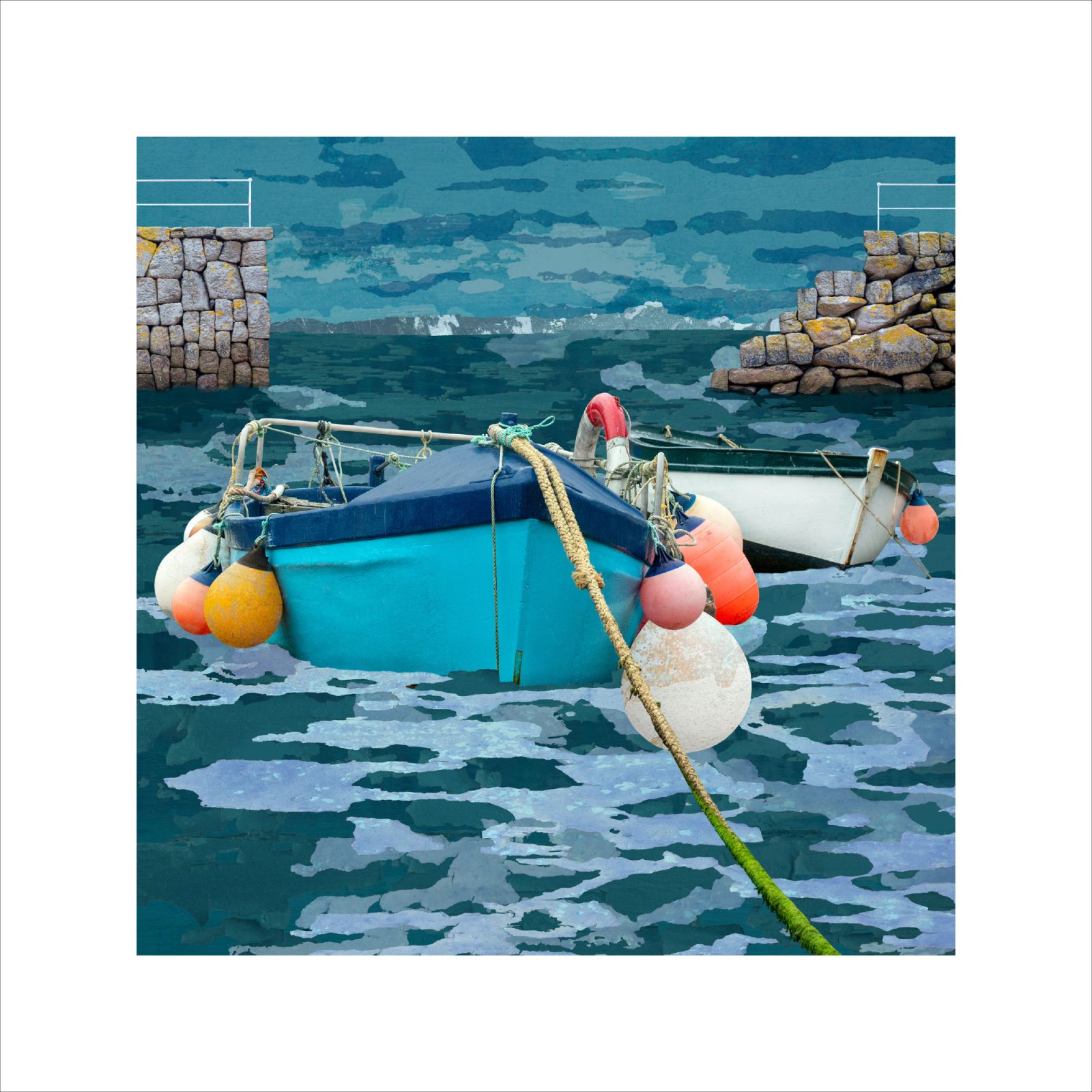